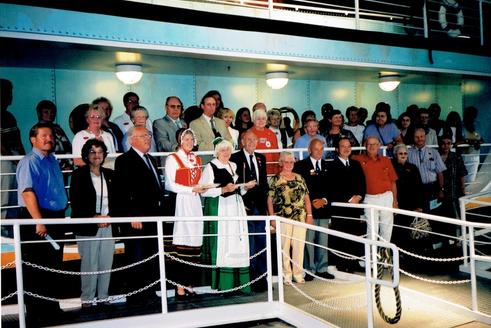 The stone was generously donated by the CBM gravel pit close to Sunset Mindepark. The stone is grey granite. It is millions of years old and was brought down from Canada's north in the last ice age. It was eventually deposited in the Puslinch area, where the glacier melted.

The stone now sits in the front corner of the large lawn in front of Sunset Villa, as part of a half circle of commemorative stones, reminding visitors of the old Nordic "Ting" assemblies during the Viking period and the Middle Ages, which democratically exercised judiciary and legislative power and authority after fair and sober debates.

Lis Sondergaard, as Director speaking on behalf of the Ontario Region, said the Region is pleased and honored to provide the funding for this project. She thanked Gert Andersen, Past President of the Ontario Region, for the idea and for getting the project started. As well, Lis thanked Soren Sondergaard for making the arrangement for the stone and the plaque within a tight time schedule. Finally, Lis thanked Sunset Villa Association for donating the space for this beautiful commemorative stone, as well as for hosting from time to time the Ontario Region’s semi-annual meetings.

Karin Thorlund Larsen, the new President of Sunset Villa Association, said Sunset Villa is proud to have been involved in the Danish Federation right from its founding in 1981. She also said that Sunset Villa is pleased to have hosted numerous meetings of the Ontario Region in addition to the Danish Federation’s twentieth Conference in 2001. Lastly, she said that the stone and plaque which were unveiled today fit in perfectly with the others in the ring of stones, which all sit in a prominent place for all members and visitors to see. She ended by saying we are always welcome at Sunset Villa – the place where the Danes meet!

Speaking at the ceremony, Rolf Christensen said the following:

Ladies and Gentlemen, Members of the Danish Federation,

Some of us stood here, or rather just over there, on Sunday, June 7, 1981, after we had founded the Danish Federation, at a meeting just inside the main building, just over there.

We were thirteen people, representing Danish organizations from across Canada, more specifically from Montreal to Vancouver. Some have passed away, such as Herbert Rasmussen, the president of Sunset Villa at the time, and Martha Larsen, a former secretary of Sunset Villa, as well as Esther Machacynski, Alice Lyvang and Poul B. Christensen. Les Bonke from Calgary attended the meeting, as well as Jonna Melander, the editor of the Danish language newspaper Modersmaalet.

Founders who are still active in the Danish Federation and its member organizations are Eva Terp, Ole Larsen, Svend Berg, Jorgen Birk Andersen and Soren Sondergaard.

The Danish Federation was established with the purpose of bringing together all existing Danish organizations in Canada, to create a permanent network of cooperation. The Federation is a Club of Clubs, and therefore the national umbrella organization of the Danes in Canada.

The Danish Federation was formed to strengthen personal and institutional contacts, to exchange ideas and experiences, and to cooperate on joint projects. Indeed, a Federation would be able to coordinate joint projects, and also to take on major projects which could not be handled by one organization alone, or which might better be carried out in cooperation, such as holding national conferences, Heritage Seminars, publishing books or backing the establishment of a Danish Canadian National Museum.

The Danish Federation has donated, or helped donate, material to the Museum in Dickson, to the National Archives in Ottawa and to Udvandrerarkivet, that is the Danish Emigration Archives in Aalborg, Denmark. We have also helped Danish Pastors with Visitors’ Permits and getting OHIP coverage. The Danish Federation has also helped acquire a four-tonne stone in Denmark for a Canadian Lung Association monument in Saint John, New Brunswick. In February 1991 the Danish Federation held a weekend meeting with delegates from across Canada at the Danish Lutheran Church in Toronto to draw up a Report on Canada’s Constitution and Future, which was submitted to the federal government’s Citizens’ Forum on Canada’s Future, chaired by Keith Spicer. The lengthy Report which details how the Danes see Canada and its constitution and future, was published in the 1992 Heritage Book.

Some of you will also remember that in August 2002 a Danish plaque was unveiled at Pier 21 in Halifax, sponsored by the Danish Federation.

The annual Heritage Book is a major contribution to our legacy. In the past the Danes in Canada were not good at recording and documenting their history, whether it was hardships or accomplishments. But with our Heritage Book we are now able to document our history, our activities and the diversity of the Danish community in Canada.

The Danish Federation’s first national Conference was held in Vancouver in May 1982, less than 12 months after its founding. By May 1982 the Danish Federation consisted of 17 member organizations. It continued to grow and for many years we have now been just over 40 member organizations. Ten of them are right here in Ontario, where there is a very active Danish community. Let me say to all of you here today, thank you for your dedication and support. You are contributing to maintaining and promoting our rich Danish heritage.

​Ladies and gentlemen, I am now going to unveil this plaque and stone, which commemorates that historic meeting back in June 1981, where we founded our Danish Federation, here at Sunset Villa. Thank you!

Step through the doors of Pier 21 and walk in the footsteps of the 1.5 million people who passed through Pier 21 between 1928 and 1971. The people who arrived at this brick building on the Halifax waterfront changed the face of Canada. Re-opening to international attention on July 1, 1999, Prime Minister Jean Chrétien and Heritage Minister Sheila Copps dedicated Pier 21 as a National Historic Site the following month. Pier 21 will celebrate the 75th anniversary of the opening of Pier 21 in 2003.

In 1989, a group of volunteers recognized that unless Pier 21 was preserved, a vital aspect of Canadian history would soon be lost. Pier 21 re-opened its doors to the public as a result of a successful $ 9 million capital campaign. Governments, individuals and corporations across Canada have recognized the importance of its powerful history. Pier 21 was re-opened to honour the contributions of immigrants who built Canada and to acknowledge the sacrifices of Canadian troops during the Second World War. It is the goal of Pier 21 to preserve living history by collecting the stories and memories of the people who passed through this gateway to Canada. By sharing the stories of Pier 21 alumni, this national historic site will increase appreciation for Canada’s heritage and diversity. 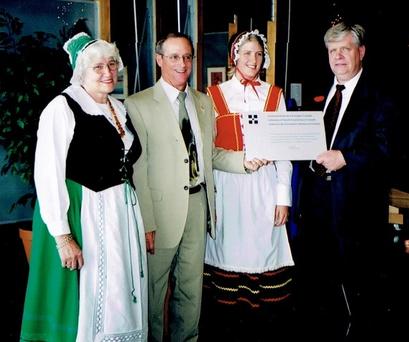 A Danish Plaque was unveiled at Pier 21 in Halifax on Friday afternoon, August 30, 2002. Pier 21 is a former immigration shed, through which 1.25 million immigrants entered Canada between 1928 and 1971. It is now a historic site and museum. It also has a resource centre for research on immigrants.

The unveiling ceremony consisted of a welcome by Dr. Ruth Goldbloom of Pier 21, who spoke about the history of the immigration shed, the Pier 21 Society and ended with some remarks about Danish immigration. She mentioned that 47,295 Danes immigrated to Canada between 1928 and 1971. Danish Consul Harry Mathers then said a few words, followed by Rolf Buschardt Christensen.

Johanne Knudsen of Toronto then presented to Pier 21 the suitcase she carried with her when she landed at Pier 21 in 1957. She also donated her old passport and other documents and photographs.

The Canadian Lung Association unveiled a monument in Rockwood Park, Saint John, New Brunswick, on Saturday, August 23, 2003, to commemorate its centennial. The stone for the monument, which was excavated southwest of Holbæk, Denmark, weighs over four metric tonnes. The stone, which is a donation from the Federation of Danish Associations in Canada, arrived in Canada already in 2002.

At the annual Danish Canadian Conference in New Denmark, New Brunswick, in 1997, the Canadian Lung Association asked the Danish Federation if it would help find a stone in Denmark for such a monument. The Danish Federation turned to Pastor Poul Berg Sundgaard, who earlier had found a couple of stones for Sunset Mindepark in Puslinch, Ontario. Pastor Sundgaard found a suitable stone at a quarry belonging to Colas Danmark A/S. When Colas heard what the stone was going to be used for, Colas said there would be no cost to the Federation for the stone. The Danish Federation paid for the transportation across the Atlantic and to Saint John.

Speakers at the unveiling ceremony included Kenneth Maybee, President of the New Brunswick Lung Association; City of Saint John Mayor Shirley McAlary; former Danish Consul Eric Teed; Canadian Lung Association President Ritchie Gage; Pastor Poul Berg Sundgaard; and the President of the Danish Federation, who thanked the Canadian Lung Association for letting the Federation play a part in this worthwhile and exciting project, and who said, "We are delighted to be associated with it. Thank you for honouring our country of origin the way you have with this monument. We are deeply honoured". DK-4 TV in Denmark had sent a crew to film the ceremony. It was later broadcast in Denmark in December 2003.

In addition to the delegates from the Canadian Lung Association, from across Canada, there were many Danes from New Brunswick, Quebec and Ontario, attending the ceremony and they all agreed that this monument is excellent publicity for Denmark. The monument, prominently situated on the main park road, mentions Einar Holbøll, the stone from Denmark, and the Danish Federation. Moreover, it is flanked by a Canadian and a Danish flag.

After the ceremony the Canadian Lung Association held a memorable Banquet with speeches and entertainment at the Delta Brunswick Hotel in Saint John. The Canadian and Danish flags with the Lung Association's Cross of Lorraine appeared on the evening's program, on a specially made lapel pin, and on the label on the wine bottles. As well, the tables were decorated with Danish and Canadian table flags. After dinner a local theatre group performed The Christmas Seal Story, a short play that recounts how Einar Holbøll came up with the idea for the Seal.

From Denmark we came with hopes and dreams, but also with tools in hand.

To build a new life, pursuing those dreams, in this, our chosen land.

And Canada opened her arms to us all, with her cities, forests and farms.

All people together, working as one. Canadians - linking arms.


About fifty people attended the unveiling ceremony. The ceremony was followed by a group photograph and a multimedia presentation. After that there was a guided tour of Pier 21.

In the evening forty people met for dinner at the Trade Winds Private Lounge in the elegant Westin Nova Scotian Hotel. Speakers included Finn Sander of Halifax, who came through Pier 21; Kyra Hansen, whose grandparents came through Pier 21; Gert Andersen of Waterloo, Ontario, who spoke about the Danish Federation; and Danish Consul Harry Mathers, a former steamship agent, who spoke about his business which included working at Pier 21. Rolf Buschardt Christensen, MC for the evening, also took the floor and conducted a 50/50 lottery with the proceeds going to cover part of the cost of the Danish Plaque.

Out of the 40, there were 10 people from Halifax, about 8 people from New Denmark and 4 people from Saint John and one couple from Denmark, while the rest were from Ontario. It was a very successful event and everyone had a memorable time. They all felt good about placing a Danish Plaque at this historic site, which encapsulates a very important aspect of Canada’s history and development - that is, its people. 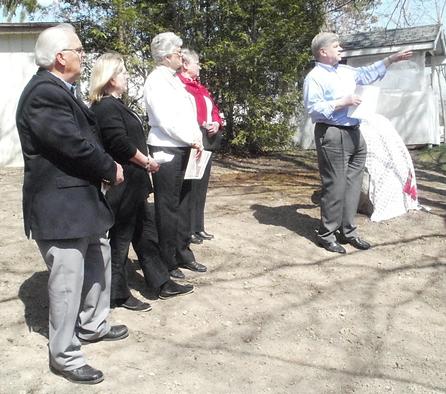 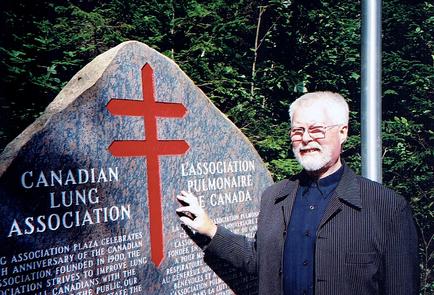 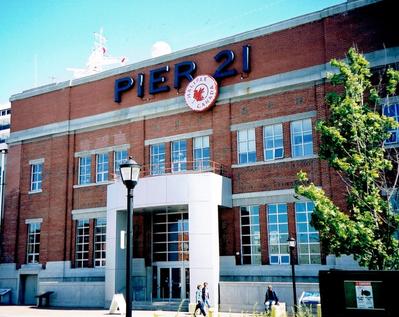 Directory of Danish Organizations in Canada 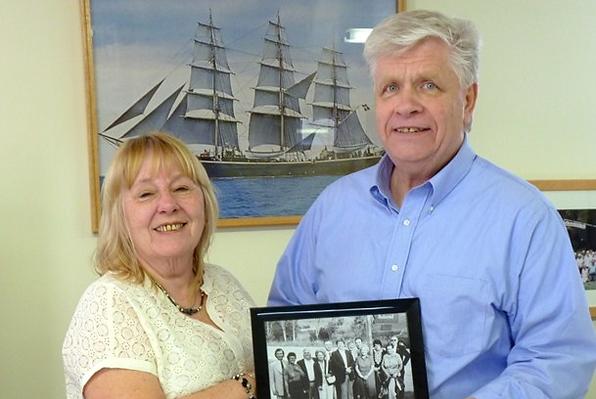 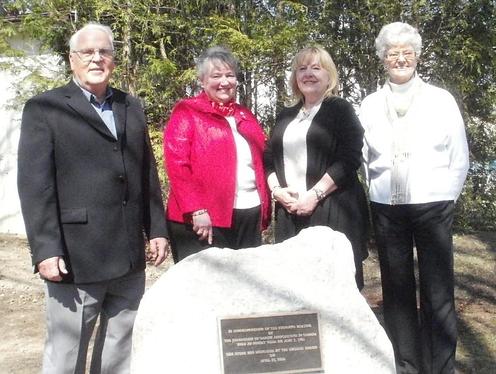 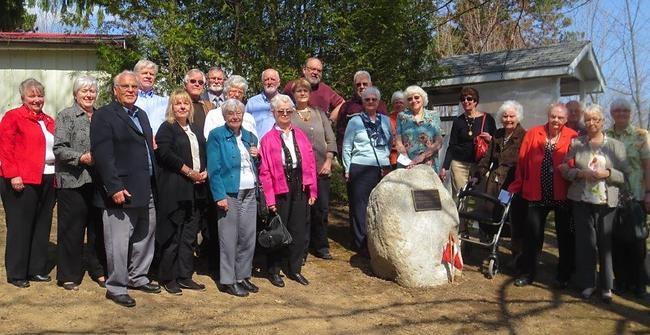 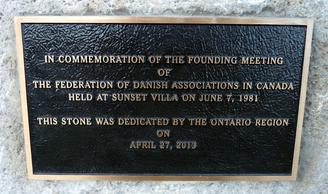 The aims and objectives of the Federation of Danish Associations in Canada: